Christo Vladimirov Javacheff and Jeanne-Claude Denat were born on the same day, 13 June 1935. He was born in Gabrovo, Bulgaria into a family of industrialists and she was born in Casablanca into a French military family.
Encouraged by his mother, a former secretary at the National Academy of Art in Sofia, Christo began to take drawing and painting lessons at the age of six. After studying in Morocco, France, Switzerland and Tunisia, Jeanne-Claude graduated and began working as a hostess for Air France. Christo began studying at the National Academy of Art in Sofia in 1952, where the prevailing doctrine of Socialist Realism kept him away from all forms of Western modern art. In 1956 he discovered the works of Picasso and Miro in Prague. The following year when the Hungarian revolution broke out, Christo decided not to return to Bulgaria. He escaped to Vienna in a freight wagon and enrolled in the Academy of Fine Arts, and then moved to Geneva in October of the same year. In these cities he washed cars and dishes while painting classic portraits of rich ladies of high society, which he signed with his surname “Javacheff”.
Christo and Jeanne-Claude met in October 1958 in Paris when Christo was commissioned to portray her mother, Précilda de Guillebon. Cyril, their only child, was born on 11 May 1960. Christo and Jeanne-Claude began to collaborate artistically in 1962: for Christo’s first solo exhibition at the Galerie Haro Lauhus in Cologne, they created Dockside Packages and Stacked Oil Barrels, the first temporary outdoor environmental artwork. The construction of the Berlin Wall began during their stay in Germany, so when they returned to Paris they erected the Wall of Oil Barrels – The Iron Curtain that blocked Rue Visconti, one of the narrowest streets in Paris. On 28 November 1962, they married in the city of Paris. In 1964 they came to New York and in September of the same year they permanently moved to the United States. They have carried out wide-ranging projects intervening on buildings, monuments and landscapes in Italy, Switzerland, Germany, Japan, the United States, France and the United Kingdom. Their works were entirely financed by the sale of preparatory drawings, collages or models.
Jeanne-Claude died on 18 November 2009. As they had promised each other in life, Christo continued to carry out the projects they had conceived together. Christo died on 31 May 2020 in the home in New York City where he had lived for 56 years. At Christo’s behest, his team created the Arc de Triomphe, Wrapped in September 2021 and still continue to work on The Mastaba, Project for United Arab Emirates conceived in 1977 by Christo and Jeanne-Claude as their only permanent project. 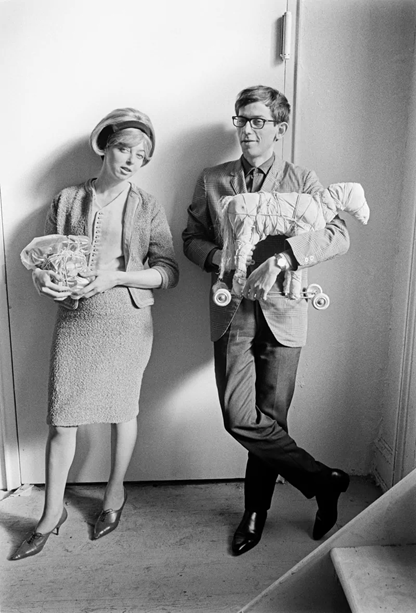